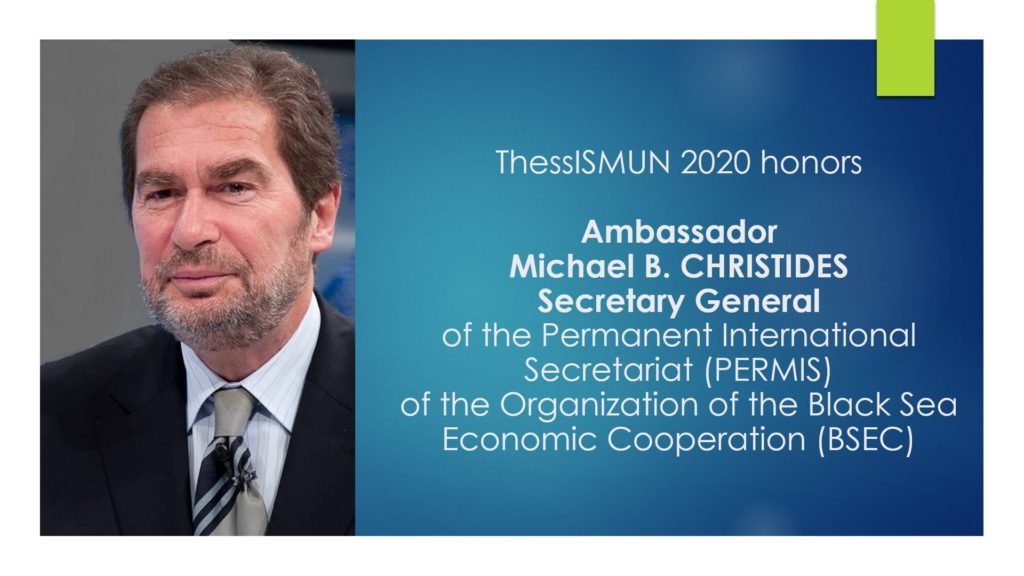 ThessISMUN 2020 will honor Ambassador Michael B. CHRISTIDES Secretary General  of the Permanent International Secretariat (PERMIS)  of the Organization of the Black Sea Economic Cooperation (BSEC).

Born in Thessaloniki, Greece in 1949, Ambassador Christides joined the Hellenic MFA in 1976 as first in his Class and served with distinction until his retirement in August 2014. Among other assignments he served as Ambassador of Greece to Bulgaria, to Turkey and to Argentina and held senior posts in the Hellenic MFA as Political Director for South East Europe, as Director General for International Organizations, International Security & Cooperation and as Director General for International Economic Relations.

Ambassador Christides participated in many international meetings and conferences and has spent more than 20 years dealing with S.E. European / Balkan issues, while travelling extensively in the region. He acquired a broad knowledge of the political and economic realities there and established a wide personal network of high-level political, business, academic and media contacts. He speaks fluent English, German, French, Italian and moderately good Spanish.

After his retirement Ambassador Christides was elected by the BSEC Council of Ministers of Foreign Affairs as Secretary General of the BSEC PERMIS, assuming his duties on 1 July 2015. After the unanimous endorsement by all BSEC Member States, the same Council of Ministers of Foreign Affairs reappointed on 15 December 2017 Ambassador Christides for a second three-year term-in-office, as of 1 July 2018 until 30 June 2021.