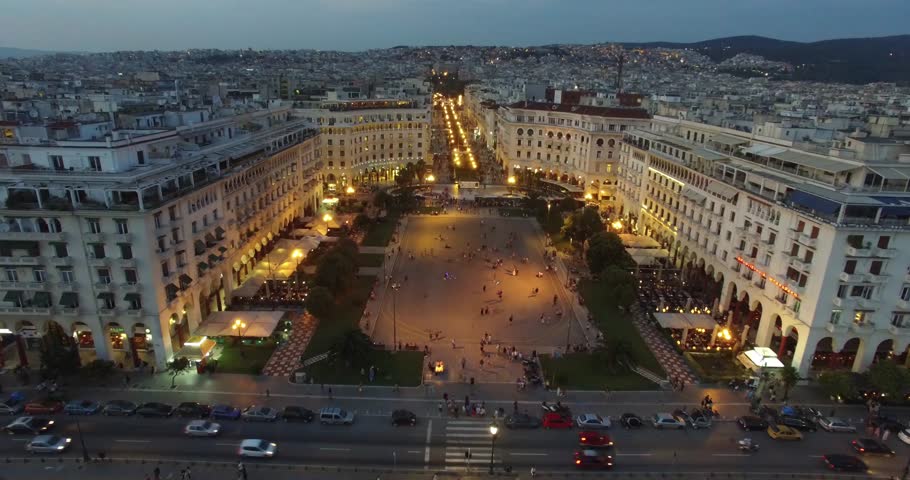 Thessaloniki (Greek: Θεσσαλονίκη) is Greece’s second-largest city and the capital of Macedonia, the nation’s largest region. The Thessaloniki Urban Area extends around the Thermaic Gulf for approximately 17 kilometres (11 mi) and comprises 16 municipalities. According to the 2001 census, the municipality of Thessaloniki had a population of 363,987, while the metropolitan population approximates one million inhabitants.

Thessaloniki is Greece’s second major economic, industrial, commercial and political centre, and a major transportation hub for the rest of southeastern Europe; its commercial port is also of great importance for Greece and its southeast European hinterland.

The city was founded around 315 BC by the King Cassander of Macedon (Μακεδονία), on or near the site of the ancient town of Therma and twenty-six other local villages. He named it after his wife Thessaloniki, a half-sister of Alexander the Great. She gained her name from her father, Philip II, to commemorate her birth on the day of his gaining a victory (Gr. Nike, pronounced Niki) over the Phocians, who were defeated with the help of Thessalian horsemen, the best in Greece at that time. Thessaloniki means the “victory of Thessalians”. The city developed rapidly and as early as the 2nd century BC the first walls were built, forming a large square.

In modern era, In June 2003, the Summit meeting of European leaders, at the end of the Greek Presidency of the EU, was hosted at the Porto Carras resort in Chalkidiki, , and in 2004 the city hosted a number of the football events forming part of the 2004 Summer Olympics.

Also, another planned bid for 2017 World Expo was announced in September 2006 and is now in full development.

Thessaloniki is a major port city and an industrial and commercial center. The city’s industries centre around oil, steel, petrochemicals, textiles, machinery, flour, cement, pharmaceuticals, and liquor. The city is also a major transportation hub for the whole of southeastern Europe, carrying, among other things, trade to and from the newly capitalist countries of the region.

The Thessaloniki International Film Festival has become the primary showcase in Southeastern Europe for the work of new and emerging filmmakers, as well as the leading film festival of the region. The event features an International Section, its Panorama of Greek Film, the New Horizons program, the Balkan Survey, and numerous retrospectives and tributes to leading figures in the world of film. Since 1993, a succession of leading lights of international cinema, incuding Francis Ford Coppola, Faye Dunaway, Catherine Deneuve and Irene Papas, have visited the Festival.

The Thessaloniki Documentary Festival was launched in March 1999, inspired by Dimitri Elpides and benefiting from the local public’s enthusiastic response, alongside extensive coverage in the local and international press. In 2005, 22,000 admissions were registered. The main programme focuses on documentaries that explore global social and cultural developments, and also now introduces a number of new side sections and events based on important works by new documentarists. Films from the main programme will be candidates for the FIPRESCI and also the Audience Awards.

The Thessaloniki International Festival of Photography (Photosynkyria) takes place in Thessaloniki from February to mid-April of every year, attracting the interest of both the photographic world and the wider public, while also functioning as a meeting point for the Greek and the international photographic scene. Photosynkyria exhibitions and events are hosted in a variety of venues around Thessaloniki, including museums, heritage landmarks, galleries, bookshops and cafes.

Photosynkyria was launched in 1988 by photographer Aris Georgiou, and over the past five years has been organized by the Thessaloniki Museum of Photography, which annually appoints the artistic director of the festival.

This three-month long festival of cultural events has been held every September-December since 1966. Named after Aghios Dimitrios (St. Demetrius), the patron Saint of the city, it has become something of an institution for the city and very popular with the local population. It includes musical, theatrical, dance events, street happenings and exhibitions, and is organised and overseen by the Municipality of Thessaloniki, celebrating its fortieth anniversary in 2006.